Get started with Puppy Class right away! Begin here for puppies under 18 weeks old. Positive reinforcement training with your puppy's development in mind.

Time to build skills for good manners & social savvy, preparing your dog to go anywhere with you.

Learn a simple, fun and effective system for raising a well mannered and socially savvy dog.

Let's fix your puppy & dog behavior problems with a solid plan executed at your home or out in the real world where the problem happens.

Do dogs know right from wrong? 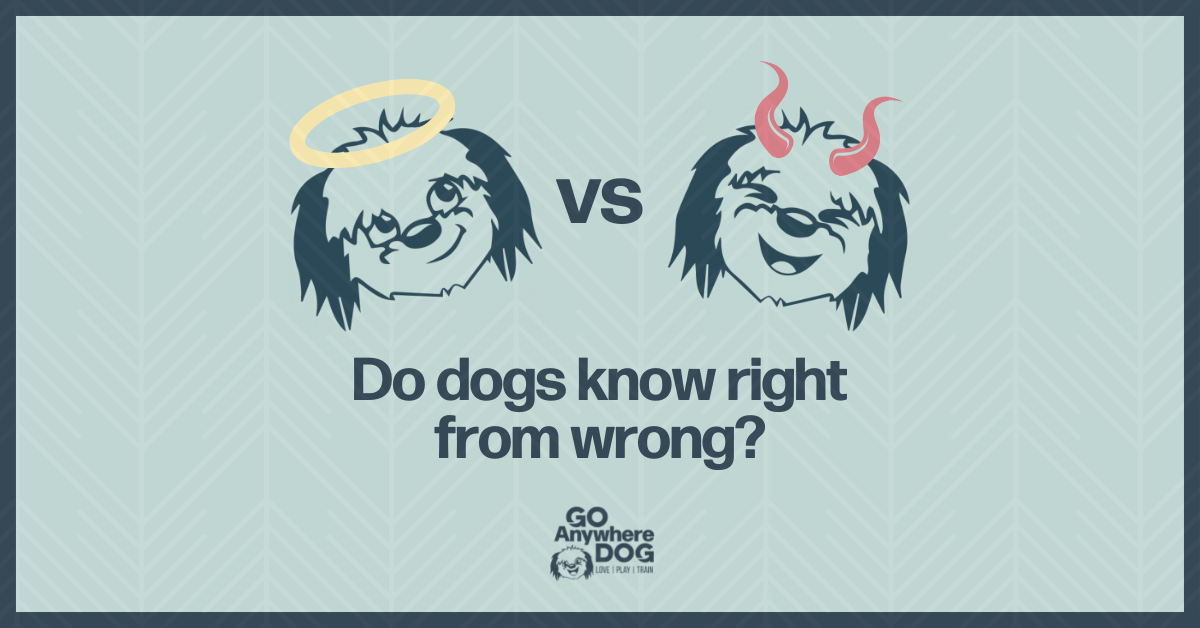 Do dogs know right from wrong?

As most dog lovers will tell you, dogs and humans aren’t all that different. We both learn through the consequences of our actions (hello, parking tickets!) and we both build associations through meaningful experiences - big and small - in our lives (think about that cozy smell of something in the oven in your childhood home!).

These two ways of learning shape our future behaviors and emotions. There is one big way that humans differ from our dogs, though: We humans know right from wrong. We have an innate moral compass and a sense of when we should do something and when we shouldn’t.

As we move through life and our values become more and more established, our definition of what is “right” and what is “wrong” might shift, but it is always in our consciousness.

Dogs, on the other hand, are a bit simpler. As my mentor Jean Donaldson says, “They are completely and innocently selfish.” You see, dogs don’t base their behavior on what is right versus what is wrong. They simply are not capable of thinking this way–not in the same way that humans do. The behavior a dog chooses is based on what has worked for them in the past, what comes naturally to them, and/or whether or not they believe something is safe.

Why does this matter?

Well, think about the last time your dog made the “wrong” choice and how frustrating it might have been for you. Much of that frustration likely came from believing that your dog knowingly made the wrong choice. That’s a much tougher pill to swallow than they simply guessed wrong.

It can help us have empathy for our dogs to know that their choices are largely about the reward history for that behavior. If your dog is regularly rewarded for walking at your side and leaving things when asked, they are likely to choose that option more often. It just makes behavioral sense; it’s not the “right” thing to do (not in your dog’s eyes, at least).

It’s all about the consequences.

But what about the associations I mentioned earlier? What’s the doggie equivalent of that cake baking in the oven?

Dogs are constantly assessing the things they encounter to figure out if they are safe or dangerous. That big garbage can in the distance on your first walk with your puppy? Chances are, they have no idea what it is. And it’s better safe than sorry, so they choose to move away from the unidentified looming dark figure.

So what does this look like? Your pup pulls in the opposite direction. They pull hard, as if their life depended on it. Because to them, it does. And you (unaware that the garbage can is even there) are left wondering why your puppy won’t just do the “right” thing. This isn’t them deliberately choosing disobedience; this is an instinctual survival behavior. They are wired to get to safety, and get there fast!

You’ll also probably notice that once your puppy believes there’s something dangerous ahead, yet another instinctual survival behavior kicks in. FREEZE! This is when your puppy stalls out in anticipation of the scary thing. So instead of seeing this behavior as stubborn refusal, it’s important to understand this is actually their way of saying there’s something that scares them ahead.

This is how their doggie brains work: 1) repeat behaviors that are rewarded and 2) stay safe. Armed with this information, you never have to feel discouraged that your dog is doing anything to spite you again. And if you truly want a dog who can participate in as much of your day-to-day life as possible, remember to teach them that the world is safe. Then they can truly go anywhere.

Stay tuned for next time when I’ll share how to make sure your puppy feels safe!

About the Author Jody Karow

I've been on a mission to decode how the dogs we love see the world and what really gets them motivated so that we can transform the way we train them. Now I want to teach this to you! Join me in revolutionizing dog training. A fresh new approach for the 21st Century urban or suburban lifestyle. I’ve enjoyed my work as training and behavior consultant for Safe Hands Rescue and resident dog expert for PetChatz. I founded a state of the art dog daycare, serving over 2,000 dogs and their guardians. I now continue to consult with dog daycares nationwide on how to enrich environments for the dogs in their care while using effective rewards and motivators to improve behavior. I’m also a very proud graduate and a certified trainer through the Academy for Dog Trainers, the world’s best dog behavior and training program taught by Jean Donaldson. I've wholeheartedly dedicated my life to helping people and dogs live amazing lives together. Passion, Education & Experience. Join me, I'd love to teach you what I've learned.

Winter Gift Ideas for your Dog and You

Should you let your dog sleep in your bed? | Minneapolis, MN

Previous Post Winter Gift Ideas for your Dog and You Next Post Do dogs know right from wrong?

A Woman’s Way To Dog Parenting